All chronometric instruments including watches are, may have a slight variation at the level of hundredths of seconds or even tenths seconds, caused by aging (or rather the bit aging) quartz crystal inserted in motion clock, or by friction, lack of lubrication of the analog part of the watch.

For astronomical viewing quality, cf. need a stop watch, with vd Potens Galaxy. you can calibrate its clock with an atomic clock via NTP network servers, this way your watch behaves like a stopwatch precision, and has the tuning level hundredths of a second.

Now if you can watch vd.usar his astronomical calculations, where high accuracy is required for stellar measurements, locate a star in the sky, for example.

Our model watch collection "POTENS GALAXY" is calibrated through a computer screen that is connected via internet with a NTP-Server, in the manner of use is how you do it, once calibrated their clock is synchronized to the server and have the exact time.

Whether it is vd. amateur astronomer like is extremely demanding on the time of your watch, POTENS "GALAXY" gives extremely accurate time, once it has been calibrated.

The clock is calibrated correctly by the Time Calibrator software. Because temperature fluctuations decreased battery charging and other questions, including the most accurate quartz watch has rotated. The self-calibrating clock uses a revolutionary technology to be calibrated through the Internet Time Server. Not only does the clock to the correct time, but it calibrates the clock time drift during a period of operation, which is guaranteed to be the exact time.
Below you can see the clock: 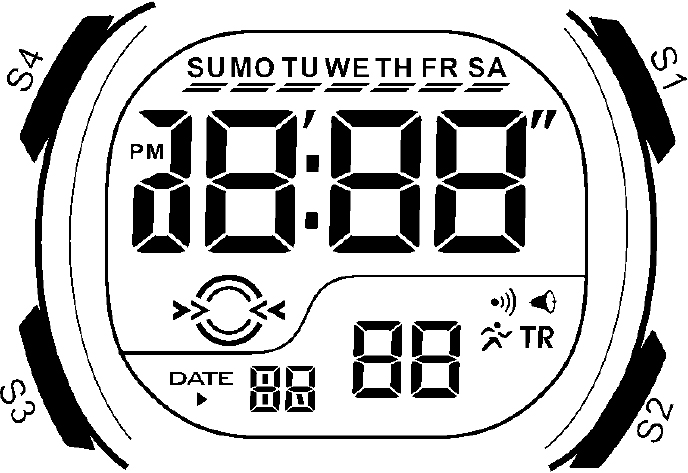 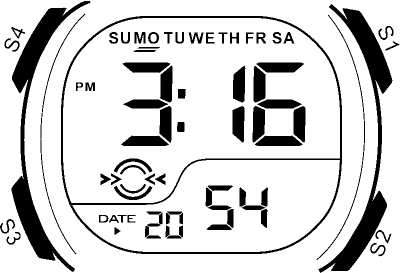 Press S3 button to change from mode to mode 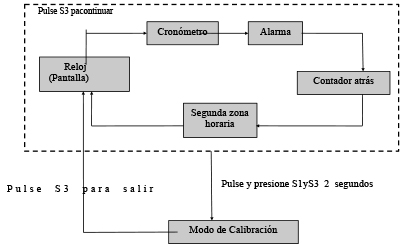 3. To calibrate the clock

3.1 Where to download the software Time Calibrator to calibrate the clock.

Please download the software from the Time Calibrator web www.self-calibrating.com to your computer, and unzip the file to unzip.

Double click on Make Time Calibrator, from below the popup. Please select language and time zone before using. 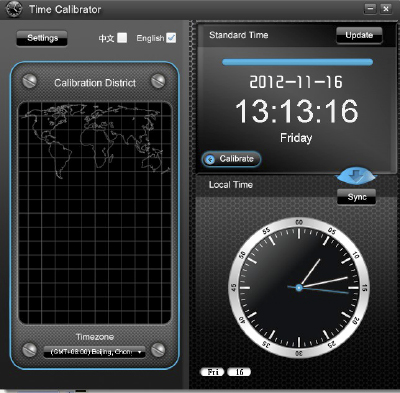 When the software is open, begin to receive and update the time signal from the E Internet server automatically, or press the "update" "update" button to start receiving the signal manually, and the real-time Internet time is displayed in screen. The blue bar indicates the download goes well, while red indicates an error if.

And if vd. want, you can also clickar the Sync button to synchronize your computer time with Internet time after you have downloaded the download. Internet access is required to activate the "Update" button Unloading and Sync.

To enter the clock Clock calibration mode, press and hold S1 & S3 for 2 seconds in any mode clock. And you will hear a beep when the clock between mode correctly. To exit, press S3.

3.4. How to calibrate the clock

The software to calibrate the watch is available in a diverse list addresses NTP time servers worldwide. However, there are some areas where the server is not included in the list., And watches the gauge fails to update. You can add a new NTP server address to the list that will appear in the NTP server by following these steps

If vd. No known addresses of NTP servers in your home, search the Internet, using the search word "NTP server address" and select the next server.

1. Click "Settings" screen pops up NTP server as below. 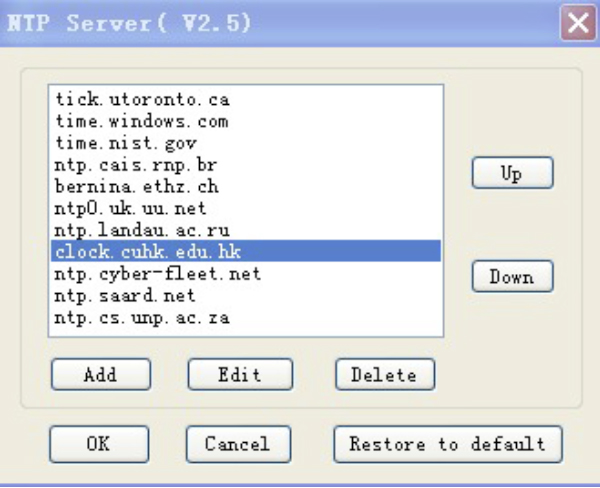 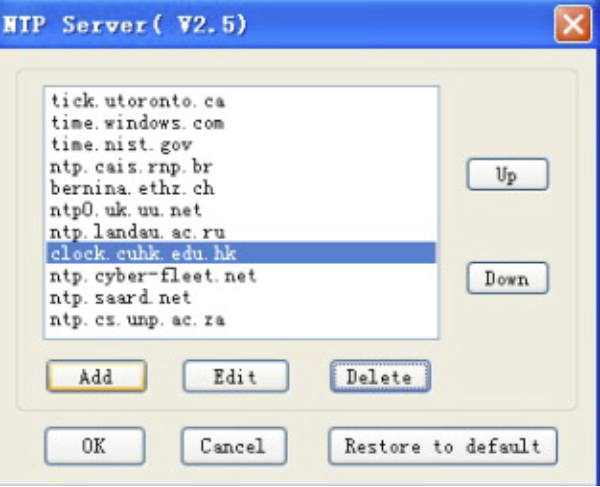 5. In case of error in the new addition of the NTP server address retry. Press Edit, when you change direction, and press OK when finished. 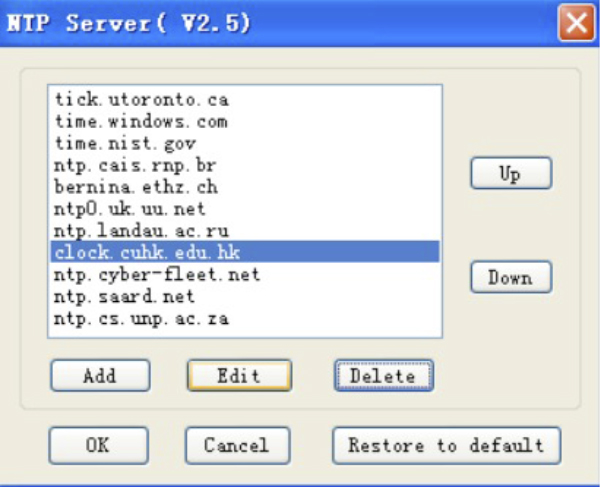 6. Should any NTP server address should be removed, press Delete, and select the address to be deleted, then press OK.

7. To download the update software quickly select program in the NTP server according to their position in this list server. Select the program first NTP server, and press Up (up) or Down (down) until you find the program to be off the list. 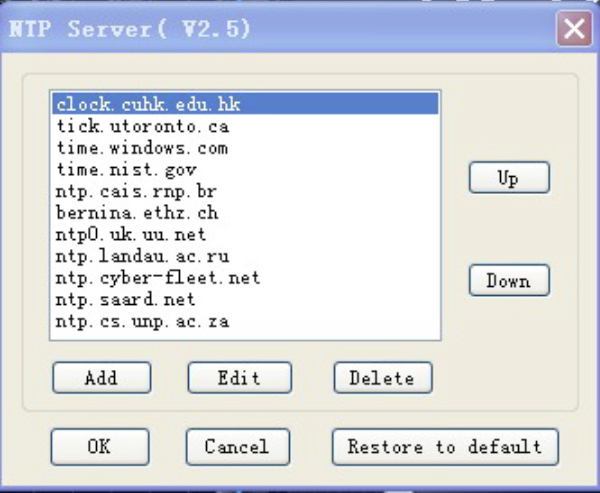 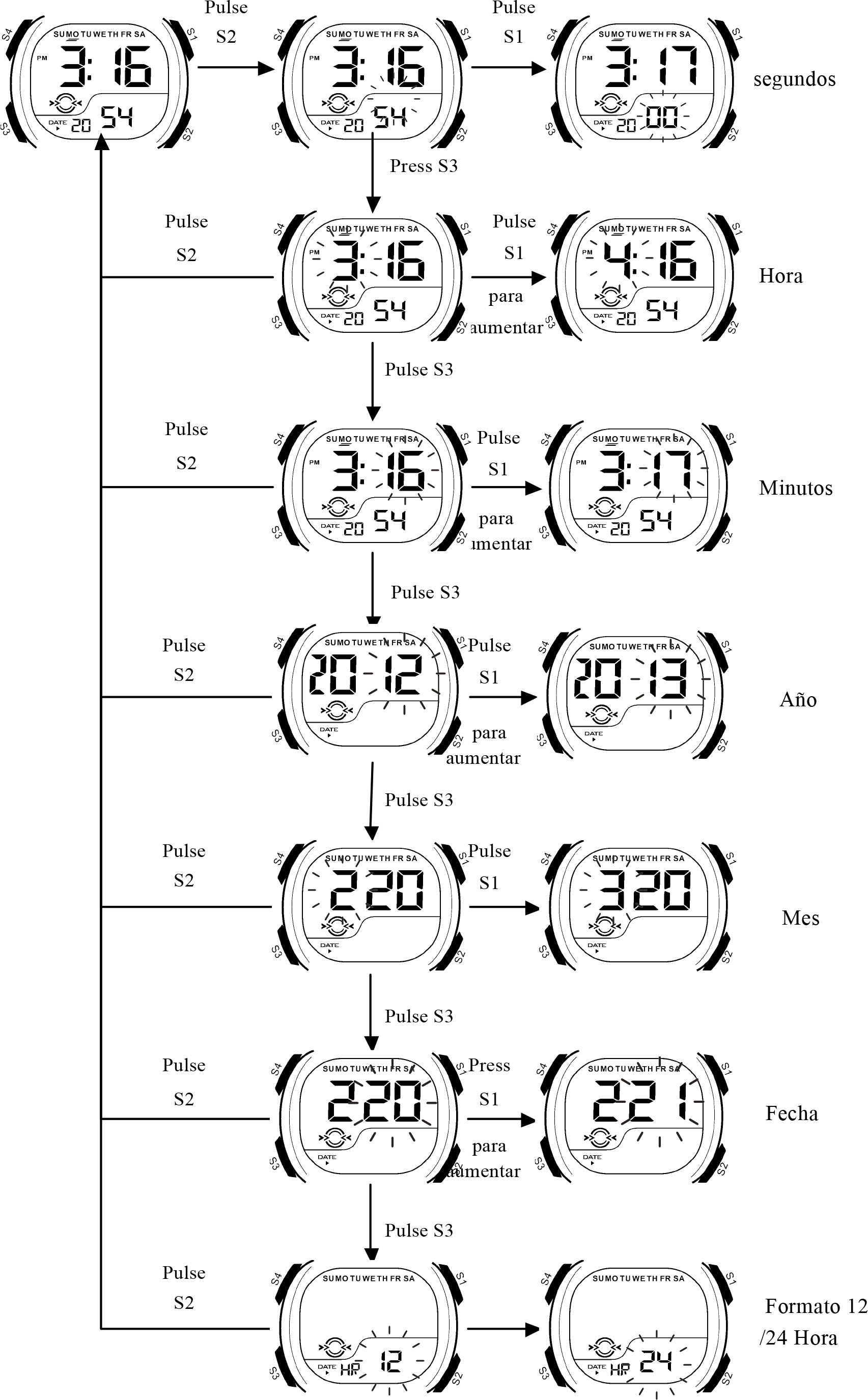 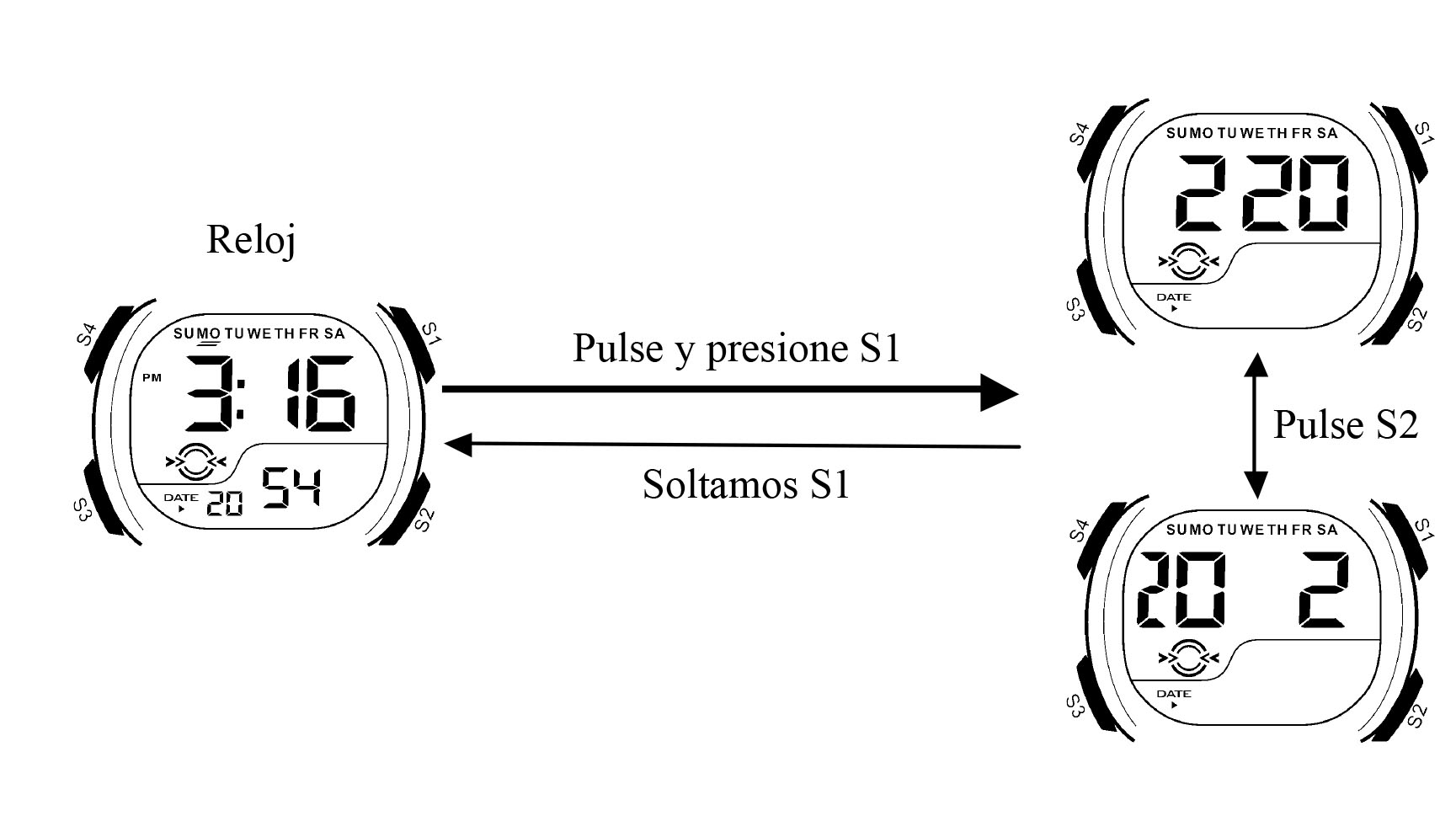 In clock mode, press and press S1 to display the date. The display shows month - date. Press S1, S2 and press in the same action and change the date - month. Press S1 to return to clock mode.

5.1 We control the time spent (we timed)

5.3 We measured the end time racers. 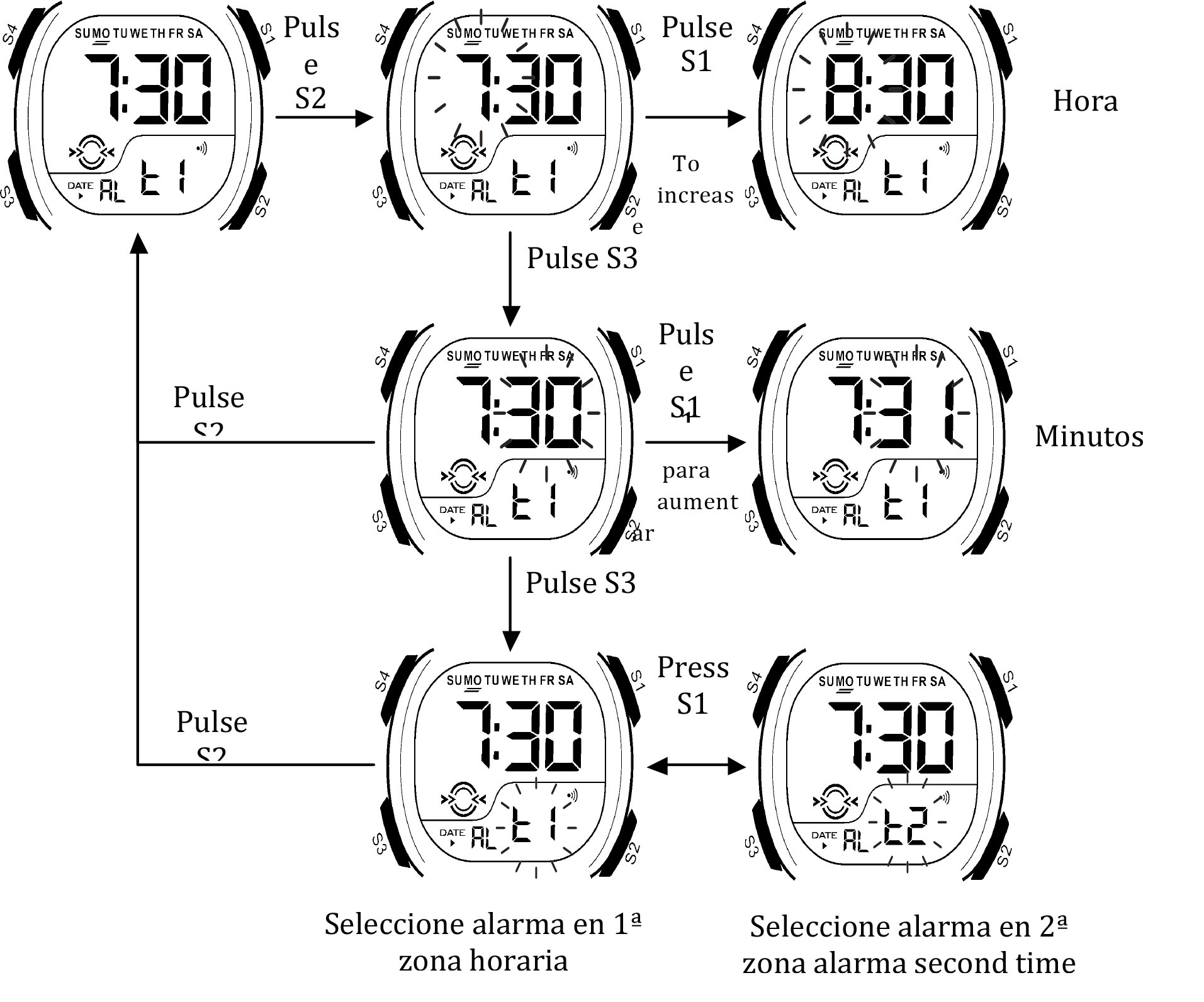 There are 2 alarms. The first alarm is used for the first time zone on the main screen.

The second alarm is for the second time zone.

The alarm will sound for 20 seconds, press any button to stop the chime.

6.2 Switch on on / off switch off alarm and chime in hours.

Note: In alarm mode, press S1 to switch on / off or on / off the alarm or chime in hours. 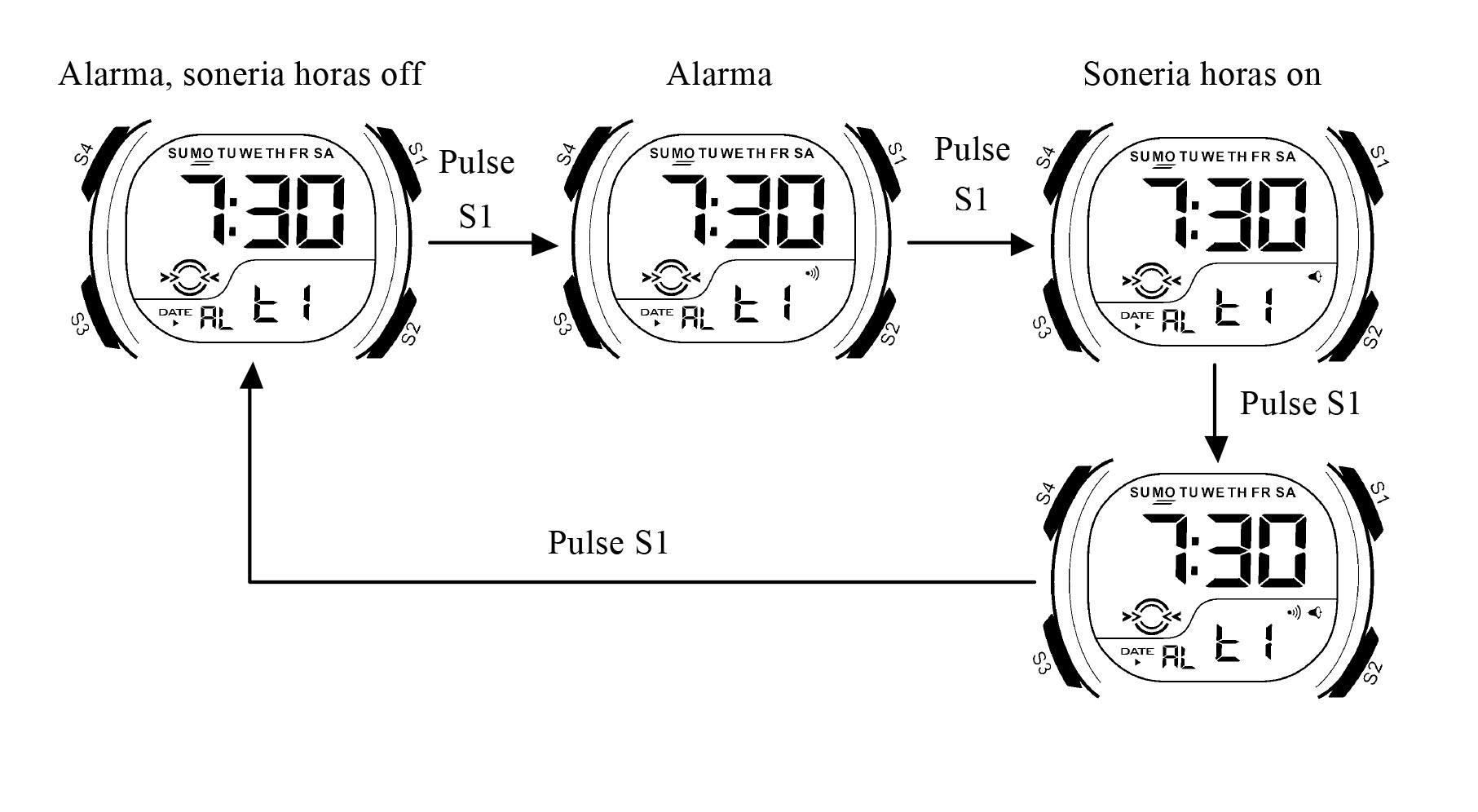 7.1 We start the counter 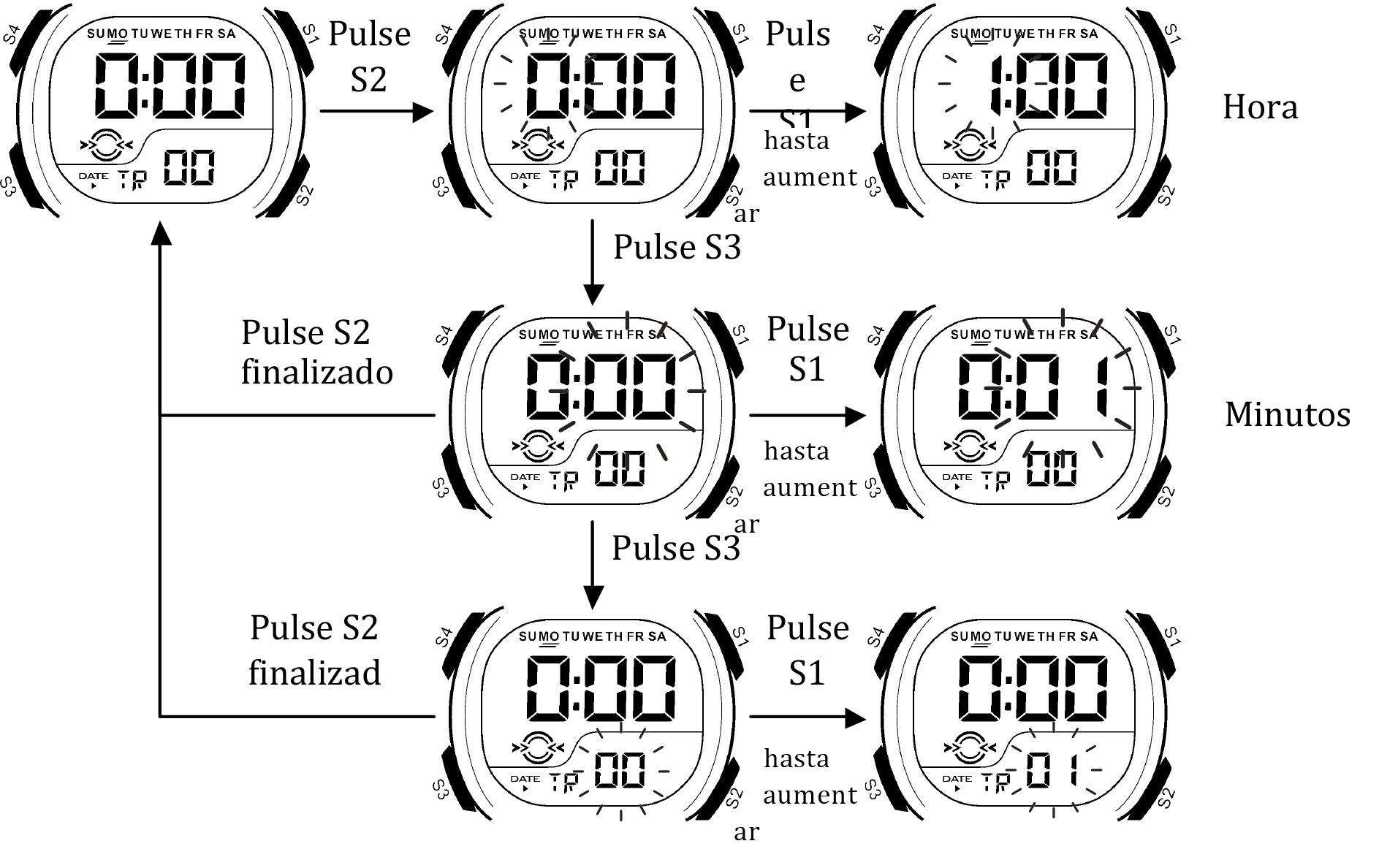 7.2 We use the countdown timer 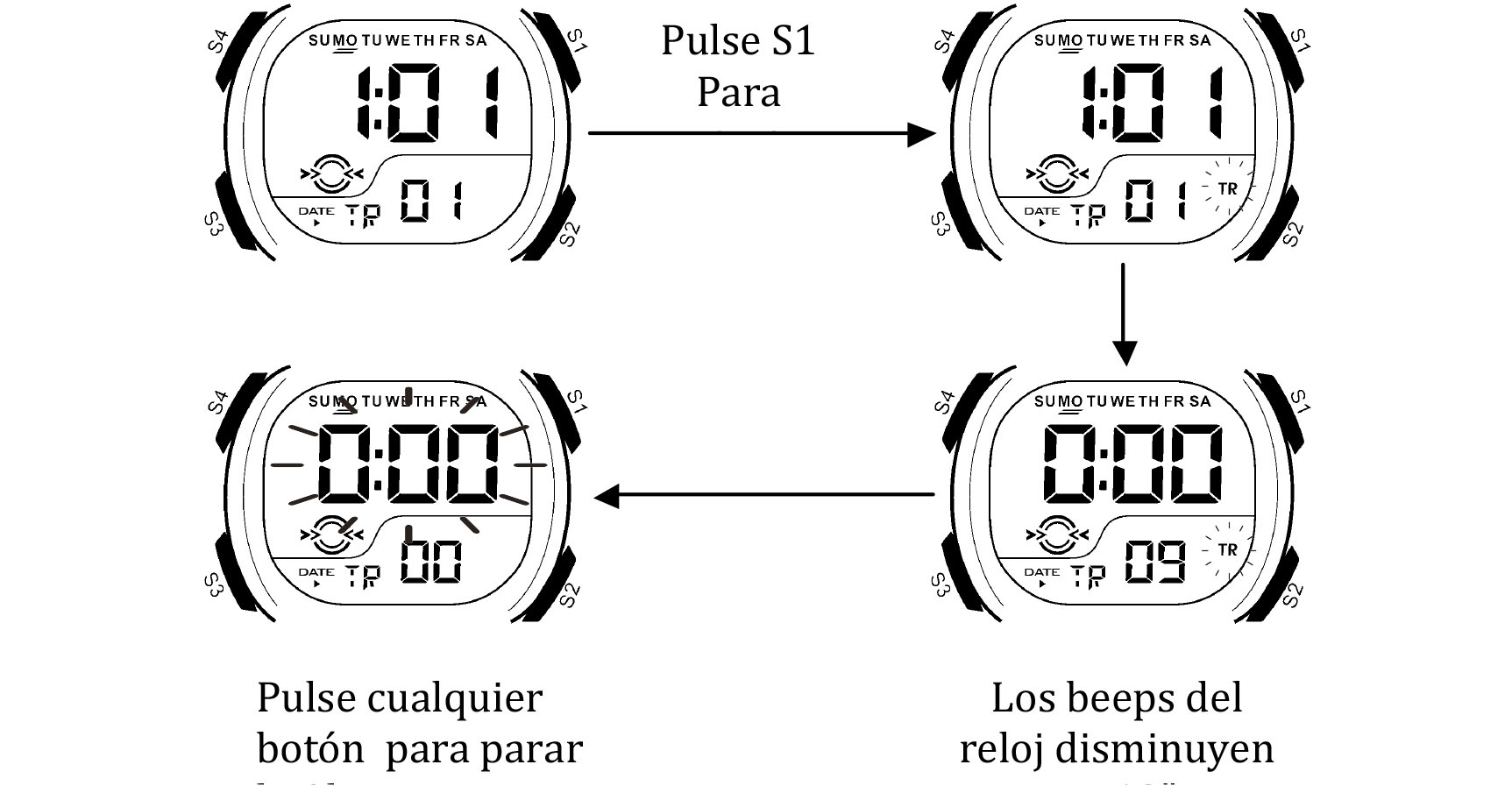 The watch will beeps a few seconds when the meter is running and you have less than 10 seconds to nearly 0.

When it reaches 0 it will sound for 20 seconds. Press any button to stop chiming.

When we changed the second zone, can only be minutes, or the same as the first area or may have a maximum difference of 30 minutes

After calibration, the minutes of the second time zone will be the same as in the first time zone.